People and entities honored by the Zumaia Flysch Trail have been the following.

The Indamendi Mountain College has been the patron saint of Zumaia mountaineering since February 9, 1973. Therefore, the association is only a few years away from turning 50 and the group is already involved in the celebrations.

Although Indamendi is outside the territorial scope of Zumaia, this mountain can be seen from anywhere in the town and for a long tradition the people of Zumaia have had it as a target; hence the name of the association. In 1955, the Oargi group of mountaineers put the cross on the summit, and since then, local mountaineers have been spreading the Indamendi name around the world.

Currently, Indamendi Mendi Bazkuna has 320 members, and although Zumaia is a small town, in terms of fans, the association is breaking records. The mountain group organizes a wide variety of activities: children’s outings, activities related to school sports, Sunday excursions around Euskal Herria and weekend or holiday trips through the main mountainous areas of the peninsula. In addition, the members of the association participate as volunteers in different local events; An example of this is the collaboration that the Flysch Trailekin mountain group from Zumaia has had.
The Indamendi Mountain School is still linked to the town today, thus demonstrating that it is on the right track to meet another 50 years.

José Mari Azpiazu Aldalur was born in Azpeitia on December 27, 1953.

From a very young age he has participated in important mountain projects such as the expedition to Salcantay in 1976 or the Basque expedition to Everest in 1980 together with Joxe Takolo.
Joxe Takolo, Jose Mari Azpiazu and Josu Bereziartua created a new way of practicing high altitude mountaineering, better known and more authentic: cleaner, without artificial oxygen and without the intervention of Sherpas. Thus, Annapurna II, Yalung Kang and Everest were the three expeditions that bore the Azpeitia seal.
José Mari Azpiazu published his first book at the age of 26: Spanish mountaineering in the world. It had the collaboration of the Basque Mountain Federation to carry out the project commissioned by the RM publishing house.
Later, Azpiazu published numerous articles and is the co-author of at least two books: Mendiak VI and Gure mendia.
Later he published the book Mi interior mendia, in Basque and Spanish. With his reflections and spectacular photographs after climbing more than five hundred mountains in Euskal Herria, he published a personal and different book.
Together with Sebas Álvaro, he has published three books: Life at the limit of life, Life at the ends of the Earth and Life in the voids of the Planet. Mountaineering, polar regions and deserts; real life lessons.
The phrase that best sums up José Mari Azpiazu is: “A lifetime dedicated to passion and the mountains.” 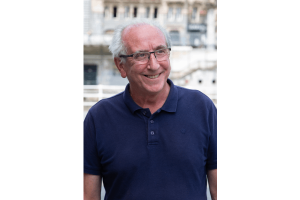